A bunch of CSCS-members went to Glasgow for the game against Kilmarnock.
Many of them travelled on their own or had already been in Edinburgh / Glasgow the day before. Finally, we all gathered at Babbity’s where we met many other friends. In the end we were about 15 persons (Swiss, Spanish, Basque, Scottish, Irish, Japanese). After a quiet Friday, we met our honorary member Martin and we handed him a wee present over – a fondue set, with a personalized steel sheet.
The same set was made for Brian as well. Unfortunately he couldn’t join us this time, because of his health condition.

Afterwards we headed off to Paradise and watched a poor 0:0. The Bhoys were not able to score any goal. But all in all it was a cozy afternoon @ Celtic Park.

After the game and a few beers at Kerrydale Suite, we moved on to the highlight of the night: The Wolfetones concert @ Barrowlands. The venue was sold out and it was good craic!

On Sunday some flew back to Switzerland, others relaxed, and a few did a stadium tour.

It was a fantastic weekend with fantastic people in a fantastic city! We will organize another trip like this in the next months. So please keep yourself informed! 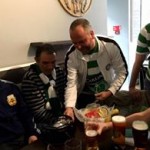 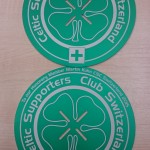 Official page of the #FondueFenians! 🍀🇨🇭 Meet us at: Pickwick BE, @McArthursLenz & @McArthursThun, Shamrock LU. Since 2003. Badges&name are ours. Hail, Hail!

“You can't expect people to show respect for something that never respected them.”

And where is the outrage about this in the british media? 🤔 #FTQ @DailyMailUK @ScottishSun @BBCSportScot